Kangra, the capital city of the Katoch Kings, has always been a center for cultural excellence. For centuries traditional songs as well as dances have flourished under the patronage of the Kings.  However, apart from the royal patronage, many factors have helped to foster such an art. Let us first look into them.

It is to be remembered that the area had been traditionally inhabited by different tribes. For such tribes songs and dance were parts of life. They used to sing when they were happy and even when they were sad. However, in the later years, high caste Hindus also came to settle here and with them they had brought their own genre of music. The music of Kangra is the result of this amalgamation.

Wars too had a played a major part in development of music and culture of Kangra. Men of this area were away for major part of the year and women were left alone. They not only had to look after the family, but also had to work in the fields. Such long separations too had given rise to a different genre of songs known as the Pakharu.

As we have said that different genres of songs have developed over the years in Kangra. Some of these songs celebrate births while others celebrate weddings. Pakharu, on the other hand, depicts the pain of separation. In the hill district, men folk often had to leave home, some time to fight and some time to earn a living. In olden days, there was a good chance that these men would never return, at least not in the near future. The wives, who were left alone, took solace in these songs.

More often Pakharus talked about the husband who had gone away. Travelling was difficult at that time and so the bride does not when he would return. Moreover if he has gone to fight for the king, there is a fear that he may not return at all. Moreover, Pakharus also depict the bride’s longing for her parental home or the mistreatment meted out to by her in-laws in the joint family. Few of these songs also try to cajole the husband into staying back and pick up wild flowers with her in spring time. 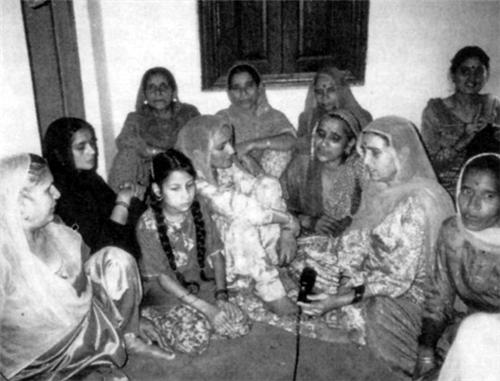 Today Pakharus have become so popular that even on happy occasions, women sing four or five ritualistic songs and then switch to Pakharu. One more important point to remember is that pakharus are generally indoor songs sung by upper caste women such as Brahmins, Mahajans, Rajputs and Suds. Earlier these upper caste women used to sing these Pakharus in an enclosed courtyard segregated from men. Today however, no such rules apply.

Barsati is another genre of songs sung by women of this area. However, these are monsoon songs sung by the women engaged in agriculture. Traditionally these songs were sung by lower caste women or by poor women of upper caste. These songs were typically sung while working in groups transplanting rice saplings in knee deep cod water. These songs too play on theme of absent husbands and martial difficulties.

Dholru, on the other hand, was sung by the basket makers, who visited the houses of upper caste people during the spring in the month of Chaitra or Chet. The group generally consisted of two women and one man, who also played the drummer. Chaitra was supposed to be inauspicious and by singing these songs, the singer dispelled all gloom and bad omen from the house of the upper castes. These songs too talk about the suffering of the women folks of Kangra.

Some genres of songs of Kangra also reflect its long history and its association with Vaishnavism. All these songs are always sung in Kangri Boli and the tunes are repetitive. Moreover, each line is repeated at least twice. Consequently, anyone can join the chorus. However, at present the pahari folk songs are fighting for their existence. Just as the rest of India, modern Hindi songs have taken up their place. The good news is that the government is now trying to promote these songs through different functions.