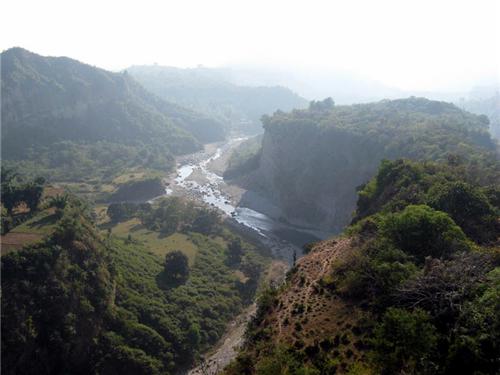 Kangra Valley, located in the lap of Western Himalayas, extends from the foot of the Dhauladhar range of mountains to the south of the Beas River.  It has an average elevation of 2000 ft. The valley has been formed parallel to the strike of the underlying rocks and hence in geological parlance it is known as strike valley or longitudinal valley. Many perennial rivers run through this valley irrigating its land. That is why the area has a thick green cover intercepted by rocky patch. Agriculture is one of the major occupations of the people here.

Location and Topography of Kangra

The city of Kangra is located at 32.1°N latitude and 76.27°E longitude at the confluence of River Majhi and River Bener. The terrain here is hilly. The town has an average elevation of 733 Meters (2404 ft).

Rivers that flow by Kangra

The three important rivers that flow by this town are River Majhi, River Benner and River Banganga. All these rivers drain into River Beas, another important river in this region.

Among the three rivers that flow by Kangra, Banganga is a major one. It is one of the most important tributaries of Beas. The river rises from southern edge of Dhauladhar Mountain. It then flows by Kangra Fort and goes on to join the River Beas in the valley below. It is a perennial river fed not only by the melting snow, but also by a number of springs. The river carries silts as it flows through the mountains and deposits them near its mouth to form a large tract of fertile land.

The River Banganga also has great significance from religious point of view. Devotees consider its water as holy as the water of the River Ganges. Many mythological stories have also been woven around it. It is said that Ma Vaishno Devi created this stream by digging an arrow (ban) into the soil. She then bathed in it washing her hair as well. Because of that the river is also known as Balganga.

Another important river flowing by Kangra is River Bener. It is also known as Bener Khad. Like Banganga, it too rises from a small channel in the southern slope of Dhauladhar Mountain and drains into Beas.

The Climatic Condition of Kangra

Kangra has four distinct seasons; summer, monsoon, autumn and winter. Summers in Kangra last from April to June. The climatic condition during this period is warm and dry. It is generally followed by wet monsoon. The annual rainfall can vary between 1800 and 3000mm.  This is followed by a pleasant autumn. The winter generally sets in mid October and end in March. However, the deforestation that is taking place is making change in the weather pattern. The need of the hour is to plant more trees and increase the green cover so that the weather remains cool and soothing.

Comments / Discussion Board - Geography of Kangra