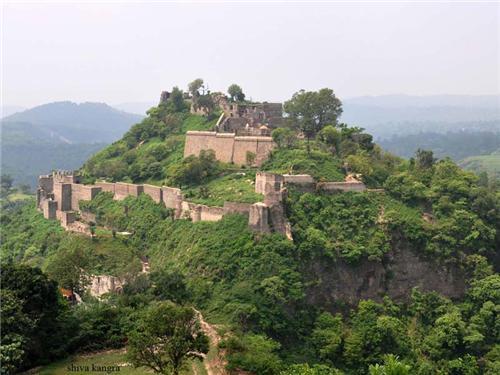 We do not exactly know who actually built the Kangra Fort. We first find its mention in the war records of Alexander the Great. If that is to be believed, one can be sure some form of the fort was in existence in the 4rth century BC. This very fact makes the Kangra Fort the oldest dated fort in India. It is also the largest fort in whole of Himalayan region.

The location of Kangra Fort

The Kangra Fort is located on top a steep hill at the confluence of two perennial rivers, Majhi and Banganga. The area falls under the Purana or the Old Kangra and is situated at 32.1° North latitude and 76.27° East longitude. 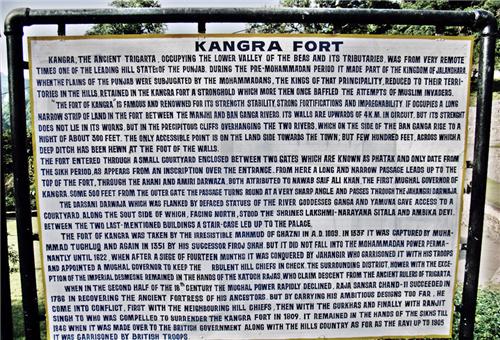 Although there is no written record, according to hearsay, this fort was first built by Shusharma Chand Katoch. Nonetheless, whoever had built the fort had chosen the location very strategically. Since it is located at the confluence of Majhi and Banganga, it remained in accessible from three sides. Its sharp height also gave it some sort of impunity. Yet, the fort has been repeatedly attacked by foreign rulers.

If we go by hearsay, the fort was built by one of the Katoch kings in distance past. This Chandrabangshi dynasty, who ruled over this land from time immemorial, traces their origin to the Trigarta rulers of Mahabharata fame. However, there is no recorded proof of that. As we have already mentioned, the first recorded history of the fort has been found in the war records of Alexander the Great. That was somewhere in 4rth Century BC.

We next find its mention in 1009. That year whole of Kangra including this fort was plundered by Mahmud of Ghazni. However, he did not stay here, but left a garrison to keep a hold on the fort. However, the Katoch Kings soon regained possession of the fort and ruled from here over the whole of Kangra until the fourteenth century.

In 1351, Firoz Shah Tughlaq snatched away the Kangra Fort from the Kotach Kings. The fort changed hands once again in 1622 and this time Mughal Emperor Jahangir came in possession of the fort.  Raja Sansar Chand of Katoch Dynasty regained the possession of the fort in 1789. However, he soon came in conflict with the neighboring Gorkhas, who put up a long sieze around the fort. Although Maharaja Ranjit Singhji of Punjab came to his aid, Raja Sansar Chand had to give up his claim on the fort and from 1809 to 1846 the fort remained under the control of the Sikh Army.

In 1846, the British took over the fort and a garrison was posted there. However, the great earthquake of 1905 changed all equations. A fort that sustained many ferocious attacks could not stand the nature’s fury. It was so badly damaged that the British garrison had to move out of it. The Royal fort of Kangra lay abandoned for a long time until the Archeological Department of India took charge of it.

Inside the Kangra Fort 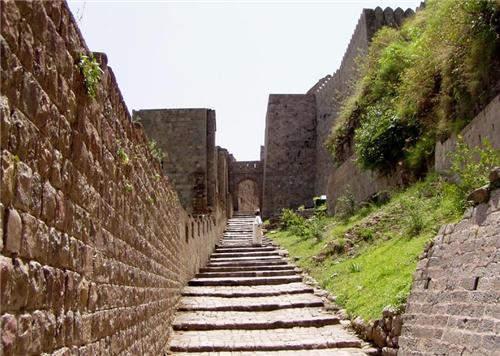 Like most other forts in India, Kangra Fort is surrounded by a high wall. It is 4 Km long. Visitors have to enter the fort through a magnificent gate named after legendry ruler Maharaja Ranjit Singhji. From this gate, a narrow passageway leads the visitor to the core area of the fort.

One significant thing about Kangra Fort is that it has many gates, each of which is beautifully carved. Five hundred meters from Ranjit Singhji Gate, the passage takes up a sharp turn and visitors find themselves in front of another beautiful gate. This gate has been named after Mughal Emperor Jahangir. The road that leads up to the top of the fort has two more beautiful gates; they are the Ahani and Amiri Darwaza.  Another gate that is worth the mention is the Darsani Darwaja. Once upon a time, this gate was flanked by two beautiful statues of Goddess Ganga and Goddess Yamuna. However, these statues have long been defaced.

The road that leads to the top of the fort is narrow and steep. However, the carvings on the walls along this cobbled passageway provide a great respite. Carvings on the gates are also worth your attention.
As the visitors walk on, they find two beautiful temples, one dedicated to Lakshmi Narayan and the other dedicated to Ambika Mata. Between these two temples is another passageway, which leads to the living quarters of the kings. Some believe that there used to be a mosque located somewhere near.

All that is left in the living quarters of the kings are some ruined walls. The 1905 earthquake has demolished most of the structures. One can also find many steps leading to different direction. There is also a large courtyard in the middle of the ruins. Higher still is a beautiful watch tower. The view from here is magnificent. One can see the beautiful temple of Jayanti Devi located on top of a nearby hill. Down below one can see Majhi River meandering by. Indeed, a visit to the Kangra Fort offers great experience and enriches one not only culturally but also spiritually.